Samuel first decided to raise money to give cops a break in 2016, after the tragedy of the Dallas police shootings. He wanted to show the policemen that they were loved and appreciated.

After his first round of fundraising for Christmas of 2016, he raised $375 and decided to purchase $5 gift cards to McDonald’s to give to police officers. That way, they’d get a little break in their day for coffee or a snack. A Break for the Blue was born.

On to the White House! 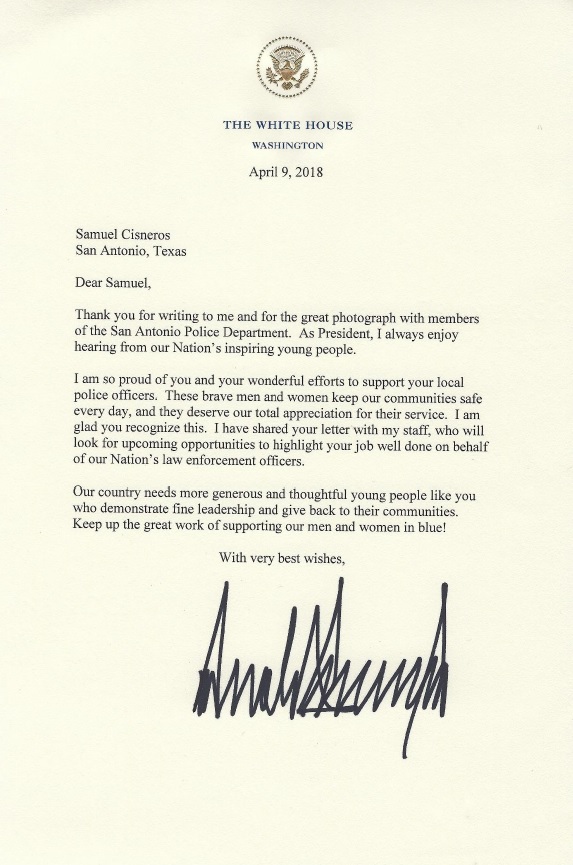 Seeing the impact of this gesture, Samuel decided to write a letter to the White House and President Trump. When the White House reached out to him and invited him to Washington, D.C. he couldn’t believe it!

Before going to the White House, Samuel received a letter from President Trump thanking him for supporting his local police.

On the trip, he got to meet with Texas Senator Ted Cruz and White House Press Secretary Sarah Huckabee Sanders.

Samuel has many goals for A Break for the Blue. In his words:

I want the police to feel appreciated. When I buy the cards I want them to feel like they are loved. They made a choice to become a police officer. They could have been anything else but they put their life on the line every day just to protect us.

He also wants to encourage kids to be involved in their community and know that they can make a difference… even in gestures that seem small.